Lineage of the ISTC 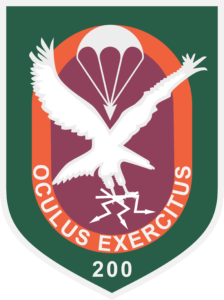 Fernspähkompanie 200 (FSK 200), which was later renamed Fernspählehrkompanie 200 (FSLK 200), was the first highly specialized long range reconnaissance unit of the German Armed Forces (Bundeswehr); and the genesis for what eventually would become ISTC.

Fernspähkompanie 200 (FSK 200), which was later renamed Fernspählehrkompanie 200 (FSLK 200), was the first highly specialized long range reconnaissance unit of the German Armed Forces (Bundeswehr); and the genesis for what eventually would become ISTC.

Fernspäher is an old term for elite reconnaissance troops, relating to the word fern (long range, distance) and the word Späher (scout).  Therefore, the Fernspäher are specially trained and equipped long range reconnaissance soldiers who cover great distances to gather intelligence and fulfill military tasks of high importance.  The Fernspäh were tasked with the gathering of critical intelligence deep behind enemy lines in order to gather intelligence and enable strikes on important targets.

On 16 November 1961, Major Konrad Rittmeyer began training the initial Fernspäh cadre of 20 volunteers at the Airborne and Air Transport School in Altenstadt / Schongau in Upper Bavaria.  The trainees came from paratrooper, mountain, and grenadier units.  After ten months of training, the initial cadre was operational and this initial group—Lehrgruppe R (Training Group R – for Rittmeyer)—was quickly reflagged as Fernspähkompanie 200 on 1 September 1962.  Shortly thereafter, the cadres for Fernspähkompanien 100 and 300 were also formed.

Altenstadt was selected for the initial stand-up location of Training Group R, as it was the home of the German airborne school (beginning in 1956) and also served as the location for the first Commando course in 1957 (clearly the hub of specialized training required to form the Fernspäher).

Initially stationed in Altenstadt, Fernspähkompanie 200 was moved to Argonnen Kaserne, Weingarten, Germany in 1964.

In Weingarten, Fernspähkompanie 200 was subordinated to the Second Corps in October 1964.

Rittmeyer’s concept proved successful enough to allow the creation of a Fernspäher school.  In 1973, the (Training Center) Fernspähausbildungszentrum 900 (FAZ 900) was established at Neuhausen ob Eck Airfield to train Fernspäher personnel.  A year later, the first thoughts began on the idea of establishing an international long range reconnaissance patrol school.

From 1977, Belgium, Netherlands, and the United Kingdom sent soldiers there to plan the establishment of a joint school with Germany.  It was founded on 12 July 1979 as the International Long Range Reconnaissance Patrol School (ILRRPS) or Internationale Fernspähschule in German, which included the Fernspähausbildungszentrum 900 personnel—with FAX 900 dissolving as FAZ 900 personnel became the framework for manning ILRRPS.

Originally, each of the three corps of the German Army was assigned a Fernspähkompanie (100, 200, and 300).

On 1 April 1993, the company was renamed Fernspählehrkompanie 200.  The syllable lehr within Fernspäh-lehr-kompanie 200 designated yet another very special task of this company.  It was the training, evaluation, and demonstrations unit (Lehrtruppenteil) within the FSLK200.  As such, it supervised and conducted special forces training for other specialized branches within the German Armed Forces.  Secondly, in peace time, it was tasked with the field evaluation and demonstration of new tactics and equipment.

In 1993, soldiers of the company took part in the first foreign missions of the Bundeswehr.

After the Bundeswehr reorganizations in 1996, Fernspähkompanie 100 and 300 were dissolved.

Until the activation of the German Army’s Kommando Spezialkräfte (Special Forces Command / Kommando Spezialkräfte – KSK) in late 1996, the only “special forces” of the German Army were the three Fernspäher Companies (100, 200 and 300).  When the KSK was activated in 1996, many of its ranks were filled with personnel from Fernspähkompanie 100 and 300, which were disbanded that same year.

On 1 July 2006, Fernspählehrkompanie 200 was transferred out of the SOTC to the Special Operations Division.

On 26 October 2011, German Federal Minister of Defense Thomas de Maiziére (CDU) presented Stationing Concept 2011 to the Federal Cabinet, announcing that the FSLK200 will be deactivated, and their functions integrated into the reconnaissance units of the EGB Forces of the Rapid Forces Division—a process that was completed by 2015.

Even the first versions of the ISTC unit patch used a similar style of eagle as Fernspähkompanie 200; but facing to the left instead of to the right.

What follows below are a series of pictures that depict the lineage of ISTC through the intertwined history and association with Fernspähkompanie 200.