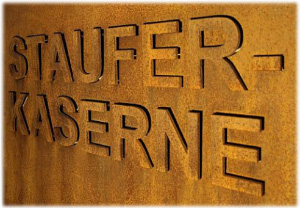 A garrison with tradition: Even Chancellor Ludwig Erhard visited the barracks in Pfullendorf in the 1960s

It was September 22, 1902 when Lieutenant-General Paul von Hindenburg and Major General Konrad Friedrich von Hausmann with 90 officers and 1,950 men were quartered in Pfullendorf.  The reason was the big autumn maneuvers.  Hindenburg lived in the hotel “Schwanen” (today Café Moccafloor) and later in the castle in Hindenburg.  At that time, Hindenburg was commanding the 28th Infantry Division in Karlsruhe.

At first nobody thought of a large Garrison

The rearmament of the Federal Republic of Germany in the 1950s was also criticized in Pfullendorf.  The original demand for a demilitarized country still haunted many people, and last but not least, it was also many former front-line fighters who “finally got fed up” with the military, as was reported several times.  For Pfullendorf, however, the garrison was also an important economic factor.  Here was an area constantly being built and expanded.  And it has remained so to this day.

To the Federal Chancellery!

The city council of the city of Pfullendorf followed with great interest the questions related to a German defense contribution and is happy to help by providing one suitable terrain for housing a garrison, and would it would be greatly appreciated if their willingness would be crowned with success.  German troops would not be in Pfullendorf uninvited and hostile guests like it might be the case elsewhere.  There would be no psychological difficulties in any way to overcome.  The population of Pfullendorf would greet the garrison with great understanding. . .

The draft of this letter came from the pen of the Pfullendorf municipal council’s Dr. Walter Ott.

It is said that next to the mayors (Leo Frank and Hans Ruck) and especially the aldermen (Dr. Walter Ott and Willi Nusser), that in the course of the process to seek a military garrison in Pfullendorf, key Pfullendorf municipal leaders several times personally visited Bonn to lobby for such a garrison.¹

At that time nobody thought of a large garrison in Pfullendorf and if history had gone differently, the barracks in Linzgaustadt might have been named after the future Reich President and Generalfeldmarschall.  Now it is simply called “Staufer barracks”, named after the great emperor family, to whom Pfullendorf also owes its city rights.  After the planning work for the barracks was completed in 1956, the groundbreaking ceremony took place on July 20, 1957.  It was the commemoration day for resistance fighter Claus Schenk Graf von Stauffenberg, which has been celebrated in more and more places in the Federal Republic since 1952.  Location management was established in September 1958 and the keys for the first construction phase were handed over just a year later.  The original name of the installation was “New Barracks.”

Garrison in Pfullendorf officially since 1959

On June 22, 1959, the first battalion marched through the upper gate and the old Pfullendorf town.  Since then, the Pfullendorf garrison has officially existed.

Today it would be unthinkable that 10,000 people would attend a public vow.  However, on 15 November 1962, it was 300 recruits from Pfullendorf took part in the first solemn pledge in Überlingen.  In Pfullendorf itself, this was already the case on 23 February 1961.²  As early as September 1961, the then Prime Minister of Baden-Württemberg, Kurt Georg Kiesinger, had visited the barracks and thus opened the round of high-ranking politicians who found their way to Linzgau in the 1960s.  As part of a festive appeal on October 27, 1964 through the “New Barracks,” the Deputy Division Commander, General Kleyser, renamed the installation from “New Barracks” to “Generaloberst vonFritsch” barracks.  On 25 June 1965, Kurt Georg Kiesinger (now the Federal Chancellor) returned for a visit.  Defense Minister Kai Uwe von Hassel also brought Ludwig Erhard, an artilleryman himself during the First World War.  In 1969, Prime Minister Hans Filbinger honored the soldiers.  He later had to resign because of four judgments he had made as a marine judge and NSDAP member.

Up to 2,500 soldiers were stationed in Pfullendorf and shaped the image of the city.  Uniforms were everywhere and some young girls fell in love with “a Soldätle” (Swabian dialect for a young soldier), as conscripts were often called with little disdain by the elderly.  Conscription had already been introduced in 1956.  Conscripted service lasted twelve months until 1962 and was increased twice in 1962.

First 15 and then 18 months.  For the young men that meant a lot of months in Pfullendorf, at least during the basic training that lasted for many weeks.  In the 1960s, you weren’t allowed to drive home for the first few weeks on weekends and not every conscript had a car.  This is how you spent your free time downtown.  Contemporary witnesses still report that many of the pubs’ inventory was broken and that the military police had enormous stress, especially on weekends.

Badge of honor for Hans Ruck

However, there was no uproar because in Pfullendorf you stood by the Bundeswehr right from the start.  In 1967, the then mayor Hans Ruck was even awarded the Badge of Honor of Artillery Regiment 10.  The army thus honored his merit for creating the garrison.  In neighboring Sigmaringen, the town council and mayor had appealed to the federal government in Bonn not to set up a garrison in Sigmaringen, because there were fears that the quiet in the city would be disadvantaged.  Then it turned out differently.

After the end of the Cold War, the barracks were mainly used by infantry units.  In 1997, the International Long Range Reconnaissance Patrol School (ILRRPS)—a memorandum of agreement (MOU) organization—and the German Fernspählehrkompanie 200, came to Pfullendorf from Weingarten.  Following the signing of a new MOU in 2001, the International Wing of ILRRPS became the International Special Training Centre (ISTC) under an updated MOU, and the German Wing and headquarters element of the ILRRPS, with Fernspählehrkompanie 200, became the nucleus for the Bundeswehr’s new Special Operations Training Center.  The SOTC is used by the Bundeswehr to train special and specialized forces for the Germany Army, especially the Rapid Forces Division (major focus on EGB units) and the Special Forces Command (KSK).³

In contrast to the Graf Stauffenberg barracks in Sigmaringen, the suspension of compulsory military service had little effect in Pfullendorf, because there were hardly any conscripts left here anyway.  In addition to the approximately 500 soldiers, around 70 civilian employees are employed at the Pfullendorf location.  These belonged to the Bundeswehr service center in Stetten am kalten Markt.  The Bundeswehr is considered an important economic factor in the city of Pfullendorf.  It is believed that the site closure would have resulted in a loss of purchasing power of six million euros annually.  The soldiers are no longer to be found in the urban area as often as in the 1960s, but many live with their families in Pfullendorf or in the local area and are simply part of it.

The barracks in Pfullendorf has changed its name twice since it was founded.  At the first groundbreaking on July 20, 1957, it was called “New Barracks”.  This is probably because there had already been barracks in Pfullendorf.  It stood on Überlingerstrasse in the suburbs and was sold for private use as early as the 18th century.  On October 27, 1964, the “New Barracks” was renamed “Generaloberst von Fritsch Kaserne” as part of a solemn appeal.  It then bore this name until 2013.  At that time, the municipal council spoke in favor of the name “Staufer barracks” and the Bundeswehr was able to agree.

This was preceded by discussions about the Wehrmacht officer Werner von Fritsch (an artillery officer by trade) who eventually became Commander-in-Chief of the Army until February 1938, when he was removed from his position.  Although he was critical of the Hitler regime, he had expressed anti-semitic views in a private letter written in December 1938 after the events of the Reichspogromnacht.  The renaming then took place on December 18, 2013 at the annual appeal.  The reason was the revision of the central service regulation “Designation of properties of the Bundeswehr”.  As a result, a total of 16 barracks were renamed by 2016.  The former names of the barracks were no longer considered meaningful for the Bundeswehr.

² The first swearing-in in Pfullendorf was on February 23, 1961 in the barracks.  Regimental commander Lieutenant Colonel Habicht, presided in front of the recruits from Field Artillery Battalion 101, Rocket Artillery Battalion 102, and the 29th Panzer Grenadier Brigade still stationed in Pfullendorf.  A delegation of French soldiers from Reutlingen was also present. (ISTC note)

³ This section has been edited from its original form to correct slight inaccuracies in the original text regarding the nature of ISTC and SOTC. (ISTC note)